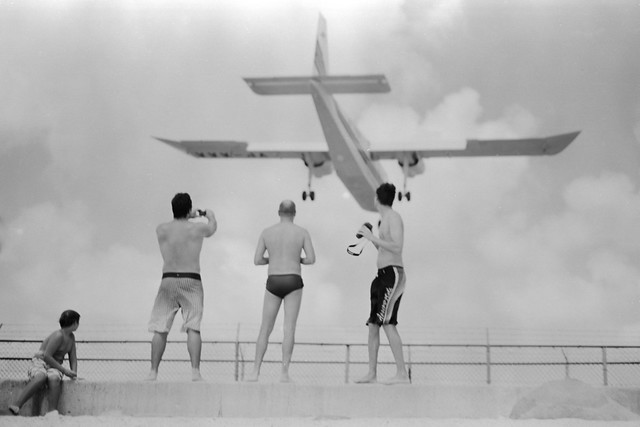 [email protected] by Leo Velimir Brancovich shot on Adox CMS 20. All rights reserved; photo used by permission from the photographer.

I'll admit it: I love Kickstarter. I've backed a total of 26 projects over the past four years, of which 24 have met their funding goals. Mostly I 'pre-buy' video games on Kickstarter. But, I have backed a handful of notable photography projects, like a an iPhone-compatible light meter, and a bevy of awesome remote camera triggers (shipping soon, I hope!).

And two of the "Seattle" projects deserve special note, too: The Scarecrow Project will turn Seattle's best independent video store into a non-profit entity, and my favorite theater in all of Seattle was able to upgrade to a digital projector (no, the irony is not lost on me).

Today, though, I wanted to highlight four projects I've run across recently—none of which I've backed yet—that I thought were worth passing along for you. Two of the projects are photo books, and the other two are new films.

First up, Al Satterwhite, an award-winning photographer, is creating an incredible, unique photobook about Muhammad Ali and his return to professional boxing after being banned for four years for his stance on the Vietnam War.

The project is about halfway to its goal, and really looks amazing. Although, I don't think I'll back it unless I can simply receive a print. There are two in particular that are featured on the Kickstarter page that I love. I emailed the creator, and hopefully he'll see eye to eye with me on this.

Next, War is Only Half the Story, Vol 7 is a photo book about Chechnya in the aftermath of their recent conflict with Russia. I would argue that war photography is the hardest, and hardest-hitting type of photojournalism. I have a huge amount of respect for anyone willing to follow in the footsteps of Chris Hondros, Robert Capa, Nick Ut, James Foley, and every other photojournalist who puts themselves in harm's way to cover these stories. But, it's incredibly rare to see a project dedicated to covering a post-war war zone. This makes sense: no news is being made, so why would an editor authorize one of their photographers to go in at a cost of thousands—or tens of thousands—of dollars? Yet, there's an important story to be told, here, and it's worth kicking in a few bucks to support modern photojournalism.

CineStill is sort of funky. They don't make new film per se, but they do recut, respool, and repackage Kodak's latest and greatest cine films for use by us still photographers. For a while, now, they've been selling an ISO 800 speed C-41 process-compatible version of Kodak's Vision3 500T cine film in 35mm canisters. Kodak Vision3, incidentally, is a modern, beautiful film that's been used in features like Django Unchained, and Star Trek: Into Darkness. It has 14 stops of range, uses a T-grain emulsion, and—c'mon—it's an ISO 800 speed color film. Help them out, and you'll be able to get it in medium format! Check out their project, which is live for another 30 days.

Last, but not least, FILM Ferrania is back. They're looking for $250,000 to rescue and restore three key pieces of equipment from the old Ferrania. If they're able to pull this off, it sounds like they'll be able to restart mass production of their 1990s-vintage chrome film. I'm incredibly excited by the idea of a new'ish film stock without, ahem, hipster overtones to it. So, help them out, and maybe you'll get a couple rolls of new film to play around with next year...And, more importantly, hopefully you'll be able to buy film for decades to come.